9 weeks into our stay here, we are shifting out of the “get settled” mentality and into “how do we best spend our (too limited) time here” thinking. Beyond all of the remarkable opportunities for adventure (recent escapades have included zip lining, swimming in outside reservoirs, – heaven! –  attending weekend markets filled with colors (see below), goods, delicious food and drinks, and live music; hiking and more trail running) it’s been exciting to shift the brain back into gear, and to become intellectually challenged once again.

It is springtime and color is everywhere – vibrant, expressive, robust, gorgeous. Kudos to Charlotte and Luke for their excellent photography skills. People have come out of their homes with a vengeance…..Cape Town thrives during the summer months, which we understand last until about May (yippee).  Below pics from various recent escapades.

Every day is a wonderful learning opportunity for each of us; everyday we mentally catalog all of the many thoughts we’d like to share with friends and family back home.  One of the more exciting learnings over the past two weeks has been about the work of Johnny Miller, an American photographer who resides in Cape Town. Johnny, featured in this recent Huff Post article, uses drone photography to depict dramatic inequality which can then catalyze conversation and action. While there are lots of technical measurements (such as the Gini co-efficient) to gauge inequality, his work is powerful, stark, compelling, irrefutable, disturbing. See below photo of Hout Bay, a neighborhood of Cape Town about 10 minutes from us.  It is one of many featured on his website. I hope to meet with Johnny soon, and to connect him with @AndyLyons who shares his love for sub-Saharan Africa and uses drones for agriculture and natural resource management (through the University of California system). (And who knows – between the two of them maybe one can help Luke and Chris fly drones straight and not into trees!)

Look at the difference! 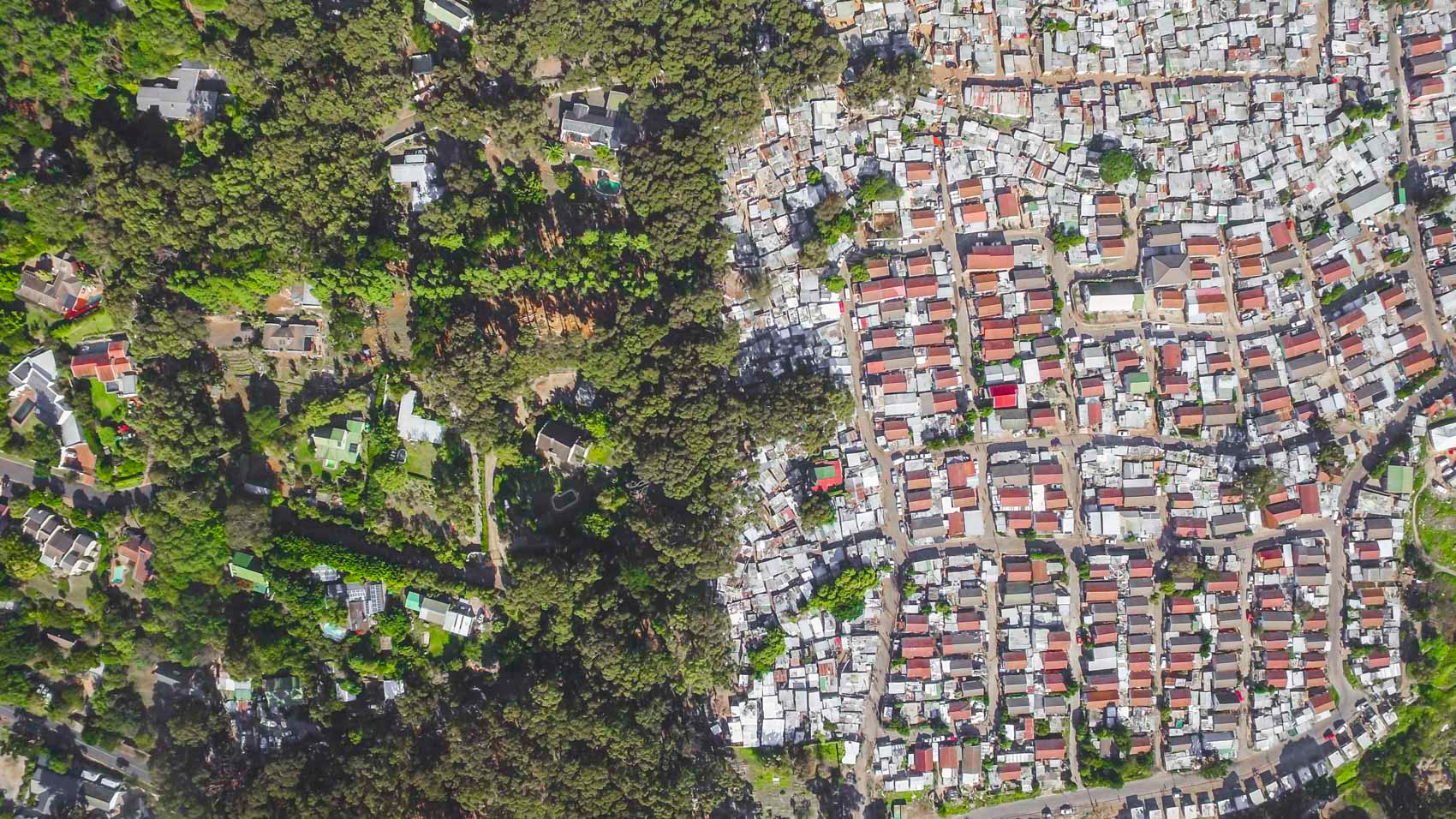 How is this okay? How is it that hundreds of thousands of black and colored people are boxed into often time unhabitable accommodation, within 1/4 mile of some of the wealthiest real estate in the continent? (And we haven’t even started talking about inequality on a global scale, compared to our standards in the states).   How has an entire country become dotted with these townships and similar aerial views?

Hout Bay certainly isn’t the only nearby township. About 10 miles east of us is Kheyalitsha, the ongoing legacy of one of the apartheid regime’s final attempts to enforce segregation. Meaning “Our New Home” in Xhosa, the initial plan was to create four towns, each with 30,000 residents. Today, it is reputed to be South Africa’s fastest growing township, with population estimates ranging from 400,000 (in 2011) to 1.5 million residents, depending on the source. Its immensity is breathtaking: 15 square miles, about the size of Alexandria, Virginia. We drove by and kept driving and driving and driving and driving. The fact that it abuts such wealth makes it truly breathtaking – in the worst way.

I have been busy networking and meeting with many folks who are or could be in the early childhood space. I am inspired, confused, and excited about the many things going on. I have met social entrepreneurs, innovators, long standing early childhood educators, philanthropic leaders, policymakers, parents, and business leaders. I am supporting @InnovationEdge, probably the most innovative early childhood investment initiative in the world, and am working with friends to develop a family service learning initiative for our school. I have attended government-convened meetings focused on addressing healthy development during a child’s First Thousand Days, and have met with social entrepreneurs leveraging corporate relationships and assets to ensure economic self sufficiency among poor women.  So much to learn – and hopefully many chances to add value.  So many similar themes and issues as in the States….and, looking beyond the obvious inequity and gross poverty – many things to build upon – such as the love of a parent for their child.

Chris, too, has continued to learn through his time at Elkanah, recently starting to teach 4 classes two days/week, with a focus on public speaking.  Now that he is settled there, he too is looking for other opportunities to engage and is exploring options ranging from schools to regional public speaking challenges.  Check out his blog for more information.

The kids have been busy collecting different phrases that mean the same thing – US vs. South Africa talk – and researching their origins.  Here are some:

“Holding thumbs” vs. “fingers crossed.”  Apparently, the origin of the gesture traces back to the biblical Kingdom of Israel. Courts of Mosaic law would often render verdicts with the phrase “May God have mercy upon your soul.” Most judges felt that while they could pass a sentence of death upon a person, they personally did not have the authority to destroy souls. As a result, some judges would cross their fingers whenever they said the phrase as a result of concern for the criminal’s soul as they said it as a prayer.  The German eqivalent of ‘crossing my fingers’, ie wishing someone good fortune, is ‘Daumen drueken’ – holding thumbs.

“Headless chicken” vs. “chicken without a head.”  The phrase originated in England, when chickens were killed by chopping off their heads. Sometimes the headless body would run around for a while before dying.

“Get on with it.”  Not sure of origin – basically means, just move on, carry on.

“Bonnet” vs. “hood”.  A car hood is the metal part that covers the engine of an automobile. The term car hood is a North American term, used primarily in America and Canada. Hood comes from the Old English word hod which means a hood, a soft covering for the head. The term car bonnet is a British term, used primarily in England, Ireland, Scotland, Wales, India, New Zealand, Australia, etc. Bonnet comes from the Old French word bonet, which means cloth used as a headdress.

“Boot” vs. “trunk.”  The word “trunk” comes from a large travelling chest attached to the back of the vehicle before the development of integrated storage compartments in the 1930s; while the usage of the word “boot” comes from the word for a built-in compartment on a horse-drawn coach (originally used as a seat for the coachman and later for storage).

“Brilliant.”  Cool, awesome. Used very frequently, often times by Luke’s two male third grade teachers (who are brilliant by the way. He’s a lucky lad to have them.)

“Proper” – adjective meaning “very” South African.  For instance:  Because we haven’t mastered the “braai” yet, we’ll be throwing a proper American style barbecue in a few weeks.

“tomato sauce” – Catsup. This is a very serious word in the Dangel household.  We love catsup – now tomato sauce – a LOT.

We are continuing to make and deepen friendships with South Africans and other expats alike.  We have found everyone to be wonderfully warm and welcoming, and have enjoyed lots of proper South African hospitality.  It’s time for the Dangels to have an open house for all the wonderful people we’ve met!

Below are pictures of us at a recent MCC Cap Classique* and White Wine tasting with our good friends Mark and Kate Austin.   (*South African sparkling wines made in the traditional French method (methode champenoise) are referred to as Methode Cap Classiques or MCC’s.)  Regardless of their title, they are delicious!

Bye till next time!!!